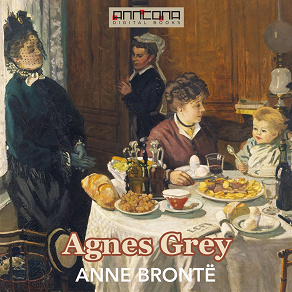 Agnes Grey is a semi-autobiographic novel by Anne Brontë, first published in 1847.

The novel tells the story of Agnes Grey, the daughter of a minister, whose family comes to financial ruin. Desperate to earn the money to care for herself, she takes one of the few jobs allowed to respectable women in the early Victorian era – the role of governess to the children of the wealthy.

In working with two different families (the Bloomfields and the Murrays), she comes to learn about the troubles that face a young woman who must try to rein in unruly, spoiled children for a living, and about the ability of wealth and status to destroy social values.

Anne Brontë (1820-1849) was a British novelist and poet, the youngest member of the Brontë literary family. She also wrote a volume of poetry with her sisters under the pseudonym Acton Bell.

Anne was the youngest of the Bronte siblings, born in 1820. Like her sisters she wrote under a pename: Acton Bell. Agnes Grey was published in 1847 and The Tenant of Wildfell Hall in 1848. She died shortly after this in 1849, aged just 29 years old.

Anne preferred a more realistic style to the romanticism of her sisters, basing her first novel on her own experiences as a Governess.

Anne Brontë shows an equal talent to her sisters; her novels are gripping and realistic, but inevitably overshadowed by the more dramatic romanticism of Charlotte's Jane Eyre and Emily's Wuthering Heights.