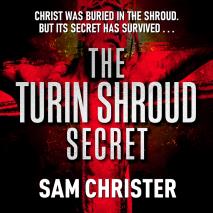 It is the most controversial religious icon in the world.

No one knows where it came from.

No one knows when it was made.

But now, the greatest mystery in religious history holds the key to a present-day serial killer who devises savage, bizarre deaths for his victims.

And only two American cops, following a trail that stretches from California to the Vatican, can expose the secret of the Shroud.

“An intelligent, exciting and seductive elaboration of both truth and fiction, a morality tale that tingles with all the tensions and menace of a fast-paced crime thriller.”
Lancashire Evening Post

“Well-plotted and well-executed, this is a chilling and clever thriller.”
Daily Telegraph

About the Author
Sam Christer is the pseudonym of an award-winning documentary maker. His first job was as a messenger for a newspaper, and he has since worked for several major television studios as a director, producer, host, and reporter. His books have been sold in thirty-five countries.